Road rage is kind of a strange thing. And for whatever reasons, at least so it seems it’s really mainly only a guys-only kind of thing. Women do road rage, though, not too many of them do but I’ve seen them. But all in all though it’s mainly just men who road rage—at least to my knowledge. Not all men road rage of course, and of the men who have road raged not all of them do-per-se road rage, but at least some of them I’d say do road rage at least somewhat regularly some of them do. It’s only just mild road rage most usually, but it’s road rage all the same. Usually it’s limited just to verbal and visual gestures, mainly F-bombs and F-fingers, maybe some other comparable like-insults but usually nothing much more than that. Even just that much though can be dangerous of course as things can always escalate out-of-hand very quickly, and when you’re on the road you’re raging with strangers, so there’s really just no way to ever gauge how someone will respond, so all in all of course it’s only wise that you not ever road rage.

But yet, even knowing this I still find myself being prone to road rage. I’ve gotten much better but still, somehow it still happens even if only just very, very occasionally. My last road rage incident actually happened on a bicycle of all things. I was crossing a four-way intersecting one main road and a residential street. No cars were even nearby, it was just me and some dude, both on bicycles, him crossing the residential street and myself crossing the main road. We’d almost crashed into each other though not really, but he’d freaked out anyway though and shouted something annoying at me, something along the lines of, “Hyaaah!! WhaGgGgah! Idiot! Get out of the way!” And so then I’d shouted back at him, “Calm the fuck down! We both see each other, either you’ll move or I’ll move, but either way then we’re fine!” So then we both moved, but in exactly the wrong directions, and though we had almost crashed, somehow we’d not. And I think as I passed him I’d even shouted “SEEEE!” at his back just to rub it in. But then, pretty much kind of immediately after that I’d felt like an idiot about it but, alas, all’d been said and done. 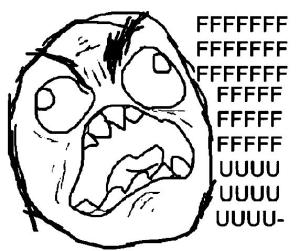 But yeah, road rage is kind of a strange thing. I have this crack-headed theory about it, that men who engage in road rage – mild road rage but still road rage – do it as a kind of, not stress-reliever but, maybe like an ego-enhancer or something kind of a thing. I mean I really I don’t know, and I’m not qualified to know, but trust me mild road rage is kind of a strange thing. Men who engage in it, somehow always seem somehow in control of it, which according to the dictionary at least makes that the exact opposite of rage. Like I’ve said I really don’t road rage anymore, but when I’d done it I think that why I did was because it was always so easy and had always seemed to come without negative consequences. And oftentimes I’d even do it while in the presence of others. But what’s most strange though is that although I would road rage, I’d rarely if ever rage elsewhere. At least so that I can think of. I tend to be pretty mellow in demeanor. But somehow I’d still rage if on road, but yet would not if off-roading. Weird right?

I’d bet that had during my prime had a road rage incident end up resulting too close for my comfort, I’d have put the kybosh on it right then and there, but no such scenario ever played out, so perhaps that’s why I’d let the game play on. In any case, though, I’m probably wrong about my little theory on it, and regardless, I’m much better off now that I try and not ever do it. People do get murdered over road rage, apparently kind of often.